I’m a huge fan of Barstool Sports. I’ve been visiting the site since 2011, became good friends with Smitty awhile back, and do a fantasy football podcast there. It’s the most unique site I’ve ever seen with the most engaged audience in the world.

About a month ago, I had an idea for my DFS analytics platform FantasyLabs to send one of Barstool’s former poker players – Smitty or Spider Monkey Nate – to play in the WSOP Main Event. We set up a death match heads-up challenge for the right to play in the World Series of Poker Main Event:

All that stands between me and playing the main event of the WSOP is Smitty. Freakin Smitty! #MustWinSituation pic.twitter.com/4NqzBbAuT4

This is an atypical type of deal for Labs, so why did we do it? A few reasons:

– I viewed our “return” on this as a long-term branding play with a wide range of outcomes – and honestly a decently high probability of moderate success with some smaller chance it blows up. Thanks in large part to the guys smashing Day 1, I think it’s blowing up. I think this is probably a top 5 or 10% outcome already with a nice path to top 1%.

– Like I said, Barstool is the most engaged site I’ve ever seen. I mean look at their Reddit discussing the event, or the Barstool Radio episode debating who is getting what money, or the comments on blogs like this one. Or just search “BarstoolNate” on Twitter. It wasn’t a huge stretch to assume Stoolies might help blow things up and get WSOP, ESPN, and others to notice.

– We have some connections in poker and figured it could be good for the game, which would in turn help things spiral out of control. It’s been great getting guys like Joey Ingram involved. He did a pre-WSOP podcast with the guys and a skit with Nate on Barstool.

We arrived in Vegas on Friday and headed straight to the suite. It was supposed to be a quiet night. We ended up at Surrender and won some money playing blackjack. Somehow $75 of my chips ended up in the pool, which seems about right. I also ran into Manz and taught him vodka + water is a thing. He didn’t make it out the next day.

Club Vegas Nate might take all the cakes. And by cakes I mean organs. @stoolpresidente pic.twitter.com/paTADiVkn7

I also got a little footage of Angry Nate:

Sunday was The Great Lost Day. I did head to Umiya with Levitan and Joe Ingram and learned their $25 all-you-can-eat sushi is the best deal known to man. Highly recommend.

Obviously, yesterday was all about the guys running it up on their Day 1 of the Main Event. It was a wild run.

228,500 to end day 1. Most fun I’ve ever had playing poker. Twitter fam was unreal. Just an amazing day. pic.twitter.com/zz22hLl2Sj

Late night noodled WSOP Day 1 recap with chip leader @BarstoolNate. May God have mercy on the poker world, or just the world in general. pic.twitter.com/Z2BetuRHgB

Couldn’t be prouder of my dudes. I think there was a decent chance of them getting coverage no matter what, but it obviously helped that they both played so well.

And then, today, all hell broke loose.

Who gets the money? @BarstoolNate goes full Spider Monkey on @stoolpresidente about #WSOP prize money https://t.co/2Tq4kWUta6

SCREAM IT FROM THE ROOFTOPS!!! MY FRIEND @BALESFOOTBALL PAID MY ENTRY!!!! I NEED TO CHARGE MY PHONE!!!!!!! pic.twitter.com/hMzBXjQxnu

When the spider monkey strikes pic.twitter.com/NhBl9jVQKz

There’s a bunch of threads about this on Barstool’s Reddit page and on the Barstool Rundown, so I’ll just direct you there for now 🙂

Otherwise, it’s been a great run so far and any time you can see the spider monkey on ESPN, that’s a win. 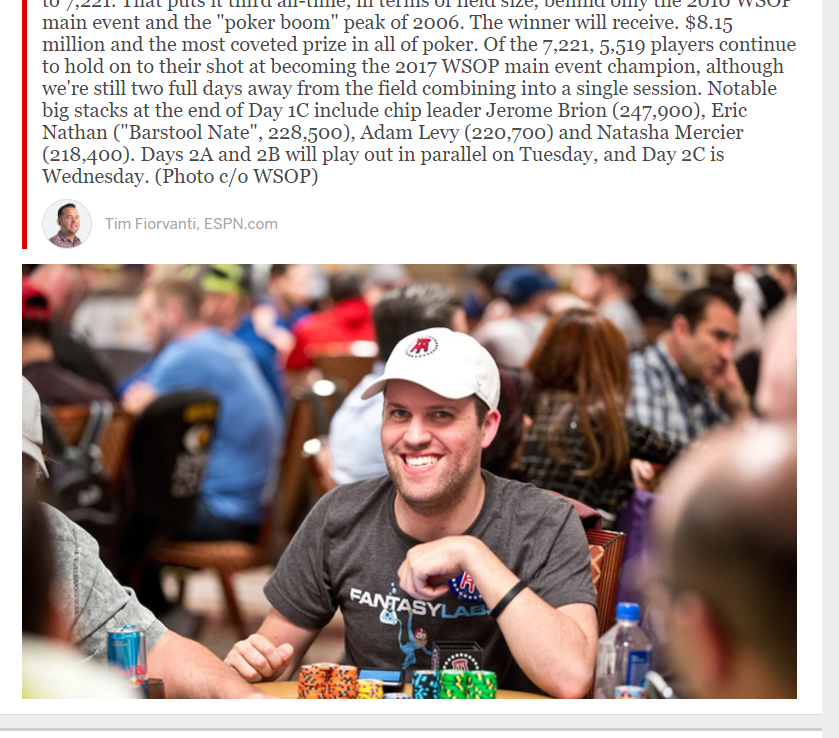 Back in college, I tracked every play in every Cowboys game and charted them into like 50 different categories: every motion, audible, pass length, formation, personnel, and so on. It took me like 10-…

There are dozens of studies showing how far humans will go to avoid uncertainty, forgoing far greater potential payoffs in favor of just knowing what they’re getting right now. Is it actually true tha…

I’m not a cryptocurrency expert. If I were to rate my knowledge of crypto from 0 to 100, I’d give it about a 3. But since most people are at about 0.2, that means I’m 15 times smarter than you about t…